Warren Buffett tends to bill himself as an ordinary guy who just happened to make a ton of money by being thoughtful, patient, and frugal. He’s also very smart, and puts a lot of time and effort into thoroughly understanding the market and his investments. But there’s one other quality Buffett has that the rest of us mostly don’t. It’s one of the biggest reasons for his success: He’s relentlessly optimistic.

Just how optimistic becomes clear in a data scientist’s recent analysis of Buffett’s letters to Berkshire Hathaway shareholders going back to 1977. Michael Toth, a data scientist at fintech company Orchard, decided to do a sentiment analysis of the letters, comparing the number of negative words such as “loss,” “difficult,” “bad,” and “risk” with the number of positive words, such as “gains,” “top,” “excellent,” and “advantage.” In the overwhelming majority of Buffett’s letters since 1977, positive words have outnumbered negative words, often by substantial numbers. 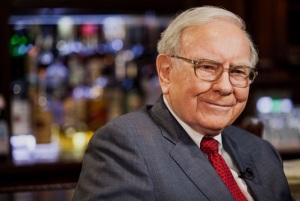 There have only been five years when negative words were in the majority, Toth notes, and they were all years that truly merited a negative description. They included 1987 (biggest one-day stock market crash in history); 1990 (Iraq and then the United States invaded Kuwait, sending oil prices up and causing a recession); 2001 and 2002 (the dot-com crash and September 11 created two years of market losses); and 2008 (the Great Recession). Every year other than those, Buffett has been unfailingly upbeat.

Well of course he’s optimistic, you might think. I would be too, if I had $76 billion! But stop a second and consider the possibility that Buffett doesn’t have a sunny outlook because he’s rich. Instead, he’s rich because he has a sunny outlook. That’s what his pals Bill and Melinda Gates believe. In their foundation’s annual letter, Melinda Gates praises him for just this quality, writing: “Your success didn’t create your optimism; your optimism led to your success.”

Can it really work that way? I think it can. Let’s see if I can convince you:

1. Optimism can create success, but not all by itself.
If you wish something hard enough you can make it come true. I’ve been frustrated by people spouting that myth many times over the years, and I bet I’m not the only one. We’ve all known people who mostly work on their own mental state, developing the most positive attitude ever, and then sit back and wait for success to arrive. If that’s your approach–good luck. This isn’t Peter Pan, and you can’t make Tinkerbell real just by believing in her.

Buffett combines his huge optimism with some very hard work and dedicated study. He learns as much as he possibly can about the segments of the market he invests in, and he’s missed out on some opportunities (most notably technology) because he won’t invest in anything unless he thoroughly understands it first. Combine Buffett-level optimism with Buffett-level passion and hard work, and then you’ll be unstoppable.

2. Optimism shouldn’t be passive.
“Optimism isn’t a belief that things will automatically get better; it’s a conviction that we can make things better,” Melinda Gates writes, and she’s exactly right. It’s facing a difficult problem and thinking not “I’m sure this will work out,” but “I’m sure I can figure this out.” We can’t solve all the world’s problems, or even all of our own, no matter how optimistic we are. But whatever difficulty we’re facing, there are things we can do to make any situation better, even if we aren’t billionaires. Optimism is recognizing that truth, and then doing those things.

3. Optimism will make you experience the world differently.
That doesn’t mean that optimism will make you blind to what’s bad, only that in the mass of information coming at us every day, optimism will change what you notice most. Three years ago, my husband and I decided to move across the country and buy a used RV to get us from Point A to Point B. As I began pondering what type and size of RV to get, I noticed that every other driveway in our upstate New York community seemed to have some sort of RV or trailer parked in it. Where had they all come from? No place–they’d always been there. I hadn’t noticed them because I wasn’t thinking about them.

This well-known psychological occurrence is called “frequency illusion” or, more colorfully, “the Baader-Meinhof phenomenon,” and you can make it work for you instead of against you. If your head is filled with thoughts about how the world seems to be collapsing, you’ll see indications that it is all around you. If your head is filled with ideas about how you can make the world better, that’s what you’ll see.

It’s worth taking a look at that Gates Foundation annual letter, because it includes a lot of data about how the world is getting better for the most disadvantaged people in it–and also how most of us are unaware of that fact. Perhaps the problem is that with more sources of news and communication, most of us in developed countries only recently learned how bad things are in some other places. Childhood deaths, malnutrition, and extreme poverty are all on the decline worldwide. In fact, the Gateses say, poverty has been cut in half since 1990. What’s amazing is the recent survey that asked people how they thought poverty had changed during that time. Only 1 percent got the right answer: that it’s gone down substantially. Seventy percent thought it had increased substantially instead.

4. Optimism helps you see the big picture.
Smart businesspeople like Buffett and Bill Gates know better than to focus too hard on the immediate past or the immediate future. They know that changes and trends can best be recognized if you take a step back and take a wider look over a longer time period. This is why, when Buffett famously offered to bet any hedge fund that it couldn’t outperform an index fund (which simply owns a predetermined basket of securities such as the 500 stocks in the S&P 500), he specified that the bet would last 10 years. He knew, as we all should, that anything can happen in a year or even a few years, but that over a decade real trends emerge.

Unfortunately, we live in a world that pushes us to think in the short term. There’s the constant flow of new information, especially over social media, and our famously shrinking attention spans. It doesn’t help that most businesses measure their performance in three-month cycles.

It takes effort to see the bigger picture, but it’s an effort well worth making, if only so we don’t become like most investors (other than Buffett) who freak out and sell when the market is on the way down, or fear missing out and buy when the market is nearing its peak. An optimistic viewpoint can help us see that big picture, especially when the present or immediate future seems bleak. For example, remembering that the markets have always come back from every downturn over time can help you hang on when the market is dropping and everyone you know is panic-selling.

5. Optimism draws people to you.
This may be the biggest benefit to being optimistic. People want to feel happy and hopeful, so if you’re optimistic, they will tend to want to work with you, do business with you, and get to know more about you. That can have powerful results.

A friendly, optimistic tone is one reason Buffett’s annual letter to shareholders is read by many thousands of people who don’t own Berkshire Hathaway stock. That in turn has raised the visibility of the company, and inspired many new people to buy shares. More people buying more shares means the stock’s value goes up, which raises both the value of the company and Buffett’s net worth, which gives him all the more reason to be optimistic.

It’s a virtuous cycle that makes all the difference, not only to Buffett and other Berkshire Hathaway shareholders but to the rest of the world, too, because Buffett has begun giving away his money, in particular to the Gates Foundation. In their letter, the Gateses explain how that gift doubled their foundation’s resources more than a decade ago. And they go on to list the ways that generosity has helped them save more than 100 million lives.

Buffett believed the world could get better, that belief became infectious, and it helped drive up his net worth. He then turned around and used that net worth to make the world better. That’s how an upbeat outlook becomes a self-fulfilling prophecy. It’s why, if your view of the world is gray or downbeat, you really should give optimism a try.